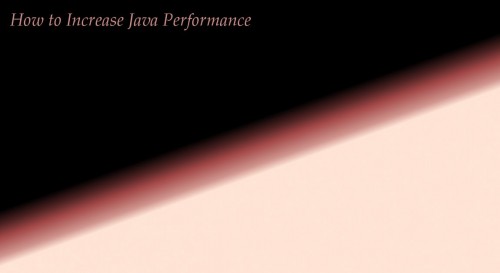 When to increase performance (and when not to)

Most of the time, there is a trade-off: You can either have fast code, or you can have clean code. And most of the time, clean code is more important. but there are cases when speed actually matters and one is willing” to sacrifice quality and maintainability of the code for an performance increase.

Generally, clean, readable code is a lot more important than speeding up the whole code by some percentage with dirty hacks. But if a function is called a lot (depending on function size from a couple thousand to a couple million times) performance might be more important. In that case: comment it. A function that nobody understands just calls for bugs later on. Here are some tips and ideas on performance increase in Java and how to achieve it. But remember: Premature optimization is the root of all evil.

Reducing method calls to objects is a good idea as calling a method is not for free (performance wise). For example, if the loop termination variable is stored in an object and you are sure that it does not change, save it in a local variable:

If size is just a constant, it probably does not matter as the compiler will inline it. But often it is not, for example when it returns the size of an internal list.

An example: instead of

A generalization of the above: If you are calculating things twice, stop that. Save the result and use that instead. This is generally a good idea, not only when performance matters as it generally results in cleaner code.

For example instead of:

In this example it is pretty obvious, but there are cases where the double calculation is not that easy to spot. If temp would be a constant factor (ie not depent on i or anything other that is done in the loop) calculate it outside the loop.

I found that unrolling loops does not help to increase speed, but it definitely makes it harder to read and maintain.

The Netbeans profiler may be used to identify and localize performance problems. This makes it easier to resolve them.

The Netbeans Profiler is easy to use and yet quite informative. to start it, just press the profile button (marked in the screenshot to the left). If you do not have such a button go to tools -> plugins and search for profiler. Then install it and the button should be there.

If your program does not need user input just wait until it finished and then view the snapshot. If the program does need user input supply enough of it before exiting the program. If you want to profile something where you have influence on the size (for example a program that performs some action on a list of points) choose a size that is neither too small nor too large. The profiler causes an overhead and if your list is too big the program will take forever to finish. However, if it is too small the data the profiler produces will not be helpful.

Interpreting the results of the profiler 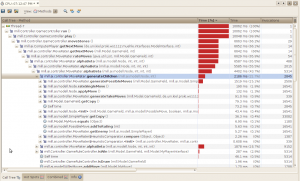 After the program is finished, you will receive a snapshot similar to the one on the left. The method that starts a thread/program naturally takes 100% of the execution time. If you press on the little plus left of it, you will see which methods are called and how much time they each take. If you find a method that takes too much time, inspect it. What is the self time of the method? Is that time appropriate or could it be reduced? What about the methods that it calls? Is it possible to reduce the number of times they are called? What about their performance? Answer these questions and you are half way to fixing your performance problems. 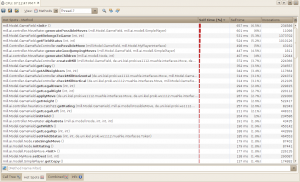 In my example, you can see that the method alphaBeta is listed inside another method alphaBeta. So obviously the method calls itself recursively. A way to easier identify bottlenecks in case of an recursive function is to view the Hot Spots offered by the Netbeans profiler. An example of this can be seen to the left.

The book Code Complete has a very nice chapter about improving the speed of java code (otherwise the book is all right as well, but this chapter really is excellent and the main reason I bought the book).